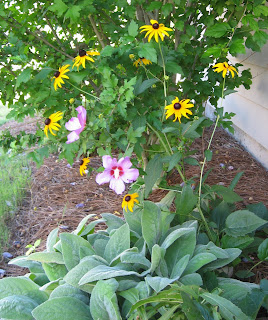 Even though I am not fond of "rules" when it comes to gardening, I do recognize that having a plan before one starts planting is a very good idea. I did have a plan last March. I had some empty space between a gorgeous Rose of Sharon and a field of mint, and decided to put some Shasta Daisy, Rudbeckia and Coreopsis there.

So far, so good - the planting went well.

The idea, in March, was that the daisies, with their white flowers and golden centers would nicely complement the all-yellow Coreopsis and the yellow flowers with brown/black centers of the Rudbeckia.

First, the rabbits ate the Coreopsis. And I mean DEVOUR! There was in a short space in time nothing left of them - no trace even that they had ever existed.

Second, I had not bothered to look at the blooming calendar, so it completely escaped me that the Shasta Daisy blooms in May (they were spectacular!) and the Rudbeckia blooms in July. Oh, well!

In any event, the Rose of Sharon is in bloom now also and if I may say so . . . it and the Rudbeckia look good together, with the Lamb's Ear in the picture also.

So, the moral of this story is . . . . gardening is fun -- missteps and all -- and if you get too serious about it, it's probably a good time to look for something else to do.
Posted by Lya Sorano at 10:01 AM