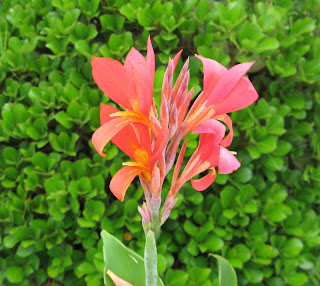 A well-known Southern gardener is font of telling the story of her experience with Canna lilies. When she first expressed an interest in them, she was discouraged by people who told her that "they only grown at gas stations and in trailer parks". She did not listen to them, and neither am I. Who would not be impressed by such a stately plant, with such a beautiful flower.

Happily, it seems that Cannas have become quite popular in recent years. Even at the Hoschton Farmers' Market, where garden plants have, the past two months, generally sold for $3 or less, the Cannas demand a price of $10 or more.

If you don't have at least one in your garden already, make a plan to add one next year.
Posted by Lya Sorano at 10:24 AM