Not because I am not well, but because I have a plant in my garden I’d like to know more about.

It was given to me by a local farmer friend, identified as “Bracilla rubra” or “Brasilla rubra”, but I cannot find information about it on the web. After the small plant started growing (and growing!), I learned that it had originally come from Dr. Cool and that’s why I need to go and see him.

I was told that this is “the ideal food” – and it may well be. It certainly grows rapidly and it is also an attractive plant, so gardeners may want to have it around even if they don’t eat it. I have tried it – not a particularly wonderful taste, but good enough to add to a salad, and it did not kill me. At least it has not so far. But until I learn more, I think I will stick with known lettuces, arugula and spinach.

It looks good enough to eat, doesn't it?
Leaf tips turn red-ish; hence, I suppose the "rubra" in its name.
It pretty much quadrupled in size in a month's time.
Before I find out more about it, I will keep it in a container on my patio,
accompanied by a variety of other pretty plants.
Posted by Lya Sorano at 1:06 PM 1 comment:

Despite the hot and dry weather of the past two months, some daylilies manage to thrive.


This one, name unknown, grows under a Pyracantha, next to a Crape Myrtle and a Virginia Sweetshrub; it is a favorite haunt of a ruby-throated hummingbird (he never sits still to have his picture taken!).

This bloom is on 1/3 of the original Chicago Knockout in my garden; the other 2/3 section was spit into three pieces earlier this year and they are also blooming now, including this one:

Soft Summer Night was beautiful a few weeks ago, but all its blooms are now gone. A new edition to my garden since April (from Shumake Daylily Garden in Jefferson, Georgia), it performed brilliantly, holding out much promise for next year.

Russian Rhapsody has, I'm afraid, not been given an optimal place in my garden and I will certainly move it in the fall to a location in which it will thrive. Others, of undistinguished or long-forgotten names, are doing a bit better, including one that loves its place next to a dwarf Nandina.

We had another fierce storm yesterday. It did not last very long (less than 15 minutes), but it dumped a great deal of rain and that has been good for my garden.


The prettiest flower this morning is the Cosmos ‘Rose Bon Bon’, which I am growing from seed from my favorite seed purveyor – you guessed it! – Renee’s Garden.

I don't know if there is anything lovelier in spring Georgia gardens than an old-fashioned gardenia. Mine comes from a cutting I received from my friend Dorila Vinas in Decatur. Its scent starts every morning with wonder and determination. For now it's in this blog's masthead. Summer will bring a different image.
Posted by Lya Sorano at 5:51 PM No comments:

I once planted a section of my garden with Shasta daisies and Rudbeckia, believing that the white flowers with the golden centers and the yellow flowers with the dark brown centers would make a lovely combination. Problem is . . . the daisy blooms in May and the black-eyed Susan in September!

Another time, I did better with the Obedient Plant and some Salvias; they were a lovely combination.


When walking through part of the State Botanical Garden of Georgia this morning, a glimpse of clumps of Russian sage next to a generous planting of yellow Yarrow made the think of plant pairings again. 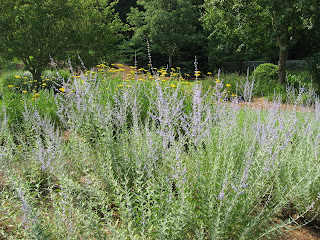 I went looking for more. And discovered Feverfew with Purple Coneflower. 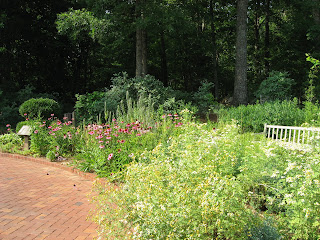 And then Germander with both Santolina virens and Santolina chamaecyparissus. 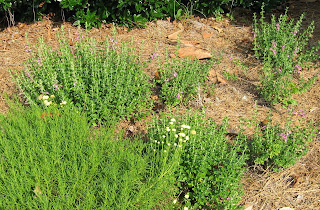 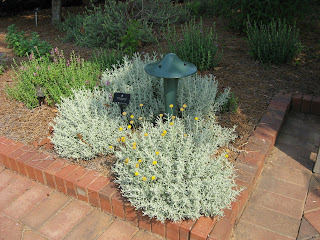