After my first two efforts to have Cleome in my landscape ended in failure, I swore I would not give this plant another chance. But, Miriam Park Gruwell convinced me otherwise, so here we are again - and so far, so good! Seed pods are already forming and I am going to collect the seeds for next year. 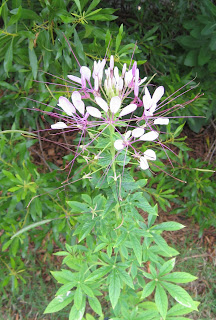 If that works, Cleome may become a permanent feature in my garden. Who knew? I may have to amend my habit of giving a plant two chances in my garden, but not a third.

Cleome, also called Spider Flower, attracts hummingbirds and is a tough plant that, I have been told, tolerates hot, dry weather (but I am suspicious that it was the drought of 2007 and 2008 that led to the failures I experienced) - of which we have had plenty since early June. This year, outdoor watering restrictions have been relaxed, and that, perhaps, has done the trick for the Cleome in my garden!
Posted by Lya Sorano at 10:35 AM

Those of us who have had cleome in our gardens admire its pretty flowers but recognize that, unless you diligently pull unwanted seedlings, it will spread wildly.

And the stems are unpleasantly thorny and sticky at the same time!

Clip the flower stems when they get 12" long and you'll get repeat flowers.

Great advice; thanks! I've already decided that Cleome will become a permanent fixture in my garden - for as much as I have control over that . . . :-)