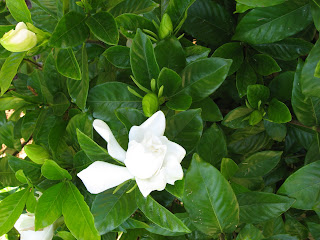 This morning, as I was digging Bermuda tendrils out of the pine isles in which three of my Crape Myrtles grow, I was struck by the dry earth underneath the mulch. Hard as rock in some places. Our severe drought continues for the second year. Yes, we did have a little rain last Saturday, and a bit more on Sunday, but overall this is not a promising summer for North Georgia gardeners.

My Crape Myrtles are trying to bloom, but the tops of the branches that bear the flower clusters, which in normal years look lush and abundant, are small and almost shriveled and the thought occurred to me that no matter what, there may simply not be enough water in Lake Lanier to save them. Not just in my garden, but all across the region.

In the meantime, the floods “up north” continue to dominate the evening news on TV. We had a President once in this country, more than forty years ago, who had a big vision – “I believe that this nation should commit itself to achieving the goal, before this decade is out, of landing a man on the moon and returning him safely to the Earth.” – and I wonder if we can have such a leader again. Someone who can inspire the country to “do something” that would make it possible for Iowa floods to be abated and Georgia droughts to be ameliorated.

Meanwhile, I think I’ll go outside and smell the Gardenias; at least they look better than those poor Crape Myrtles.
Posted by Lya Sorano at 10:20 AM