Except for the State Botanical Garden, which had belatedly attached a .pdf to its web site, it was unknown what would be available where. But, remembering the horticulture club’s excellent buys last year, I decided to make that my first stop.

Of the plants on my list, the only one offered was a Yarrow (not the pomegranate I’ve been looking for, but a pink one: Dwarf Yarrow – Achilea millefolium ‘Cerlet’s Rose’). Paying $8 for a Yarrow seems a lot to me, but I did it anyway. Also bought a Columbine – Aquilegia ‘alpine blue’, since Columbines had been a recent Facebook discussion topic. The price, $5, seemed reasonable. Then I spotted a table with annuals, with 6-packs for $2 each and I bought 2 packs of Angelonia. 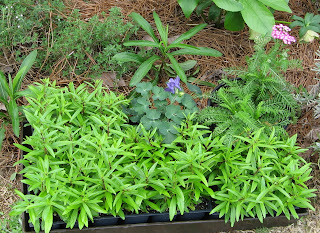 Next stop: the UGA trial gardens. This was a situation of “well, I got here, so I might as well buy something”: an Ajuga (‘toffee chip’) and a Cuphea cyanea (‘candy corn’) - $5 each, which I thought was expensive, but there was nothing available for less than $5. Most plants were $10, $15 and $20 each. Dr. A was everywhere, with his bullhorn, recommending this plant and pointing out another. He said not to pay any attention to him, he often just talks to himself anyway, so I didn’t.

I had saved the botanical garden for last on purpose, thinking its plants were going to be more expensive than those sold at the other two locations (not true, it turned out), and this was a big mistake! Even though I got there shortly after 9 AM (the sales had all started at 8 AM), the one plant on my list that I really, really wanted (Carolina Jessamine) was all sold out! So, from a table staffed by Director Wilf Nicholls, I bought three tiny Amsonia hubrecthtii: $4 each. 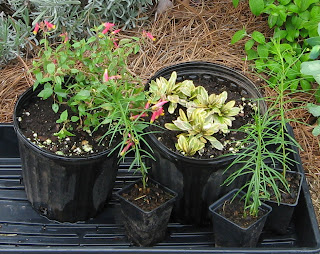 By then, with barely a dent in my wish-list, I realized I should have bought all of the horticulture club’s Angelonia 6-packs, Angelonia having been my favorite annual for the past two years and once having paid as much as $5 for one plant at a neighborhood sale, so I went back to that location and was lucky enough to find two packs still on the table. Had they been in bloom, I think they would have been snapped up well before I returned, but an Angelonia before it blooms is nothing much to look at and shoppers in between my two visits probably had no idea what these plants were – or would become in summer.

On the way home, I stopped at Shumake’s Daylily Garden and bought a few ‘Soft Summer Night’ – maybe the best purchase of the day, but it all depends, as is the case with everything a gardener does.
Posted by Lya Sorano at 3:43 PM

I found the prices to be a bit high, too. They had some 4" pots at the Bot gardens for $9! Crazy! The Hort Club seemed better with prices and selection. Got a cool variegated Heuchera.