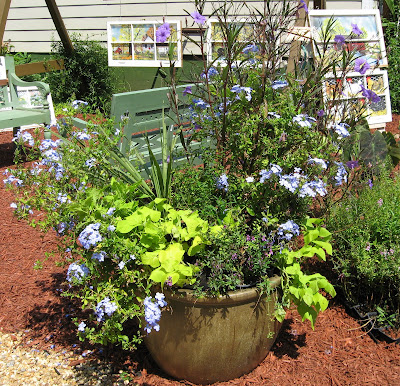 Had I been in a doctor’s office this afternoon and been told I had “plumbago”, I would have thought I’d caught some dreadful disease – tropical maybe, perhaps infectious. Instead, I was in a garden, admiring a plant with blue flowers that surely had to be a Phlox. “No”, everyone else there said, “it’s a Plumbago”. It’s these kinds of experiences that can cut a Master Gardener down to size very quickly. I had never heard of “Plumbago”. But, sure enough, I did some research when I got home and discovered that this plant is a shrub, originally from South Africa, that can grow into a nice hedge, and that in the U.S. it’s suitable for zones 8 to 11. Well, last time I looked, I lived in zone 7B, so the three small specimens the garden’s owner gave me will need some special care if they are to make it into 2011.

“Plumbago” – odd name, but a beautiful flower. I hope the plants will survive the coming winter.