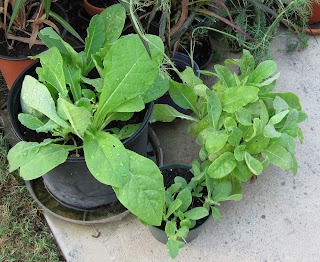 As in “Scented Nicotiana” that is. This is Jasmine Alata, grown from seed; I followed the packet’s instructions precisely, more or less, and nothing happened. The plants, tiny, just sat there all summer long. I watered and fertilized, moved the containers from one spot to another – nothing helped.

Now they are growing so rapidly that I can almost see them getting bigger as I spend a few hours in my garden. I think it’s because our summer has been brutally hot, which affected the growth of many plants. The days now are still very hot (91F today, expected to go down to 79F by Sunday), but the nights are much cooler. The question now is: will it bloom before the first frost of the season, which could come as early as four weeks from now, kills it. I hope so! 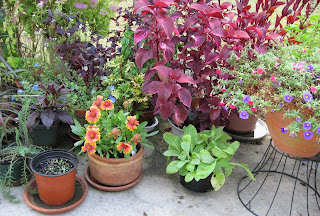 The Gaillardia did not like the hot summer either, but is now coming back nicely, and the Calibrachoa from Hort Couture is getting a new lease on life as well. Other plants in the picture: Coleus, Alternanthera, Basil, Yarrow, Blue Daze and a Dill that is determined to stick around till it can produce some seeds for next year. I love an eclectic garden - even on a patio corner!
Posted by Lya Sorano at 1:20 PM