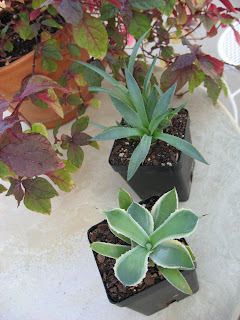 Last August, at the media luncheon of the Southern Nursery Association trade show, we all went home with two tiny Agaves (see August 9, 2008 post). Look how they have grown! Especially 'Bloodspot' (top) which has not only more than doubled in size, but also grown several "babies" alongside. 'Happy Crown' is also doing well, even though its growth has not been quite as rapid.
Posted by Lya Sorano at 12:26 PM

Email ThisBlogThis!Share to TwitterShare to FacebookShare to Pinterest
Labels: Agave

Lya, I enjoy learning all these tips and facts about plants! ;) Thanks for a lovely tea today! ~CC Catherine ;) The blog I want you to take a look at is http://betweennapsontheporch.blogspot.com

OMG . . ., not only have I seen it (http://betweennapsontheporch.blogspot.com/), but I love listening to the music Susan has posted. Thank you so much for pointing it out to me! I've added it to my blog roll somewhere.