Great Start to the New Year for North Georgia Gardeners

Wilf Nicholls, Ph.D., the garden's new director, talked about Newfoundland (his former home) at a "Friends of the Garden" breakfast this morning at the State Botanical Garden of Georgia in Athens. 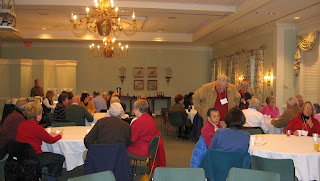 Awaiting the speaker . . ., and breakfast!
Not only is he extraordinarily knowledgeable, but he is also a fabulous story-teller and since we Southerners often are oblivious of the world "out there", a story with interesting points is bound to draw us in.

Who knew that Newfoundland has 48 native species of orchid? I certainly did not! Or that St. John's is located at the same latitude as Seattle (such a different climate, though!), or that the island has no soil. The Memorial University of Newfoundland (MUN) Botanical Garden, where Dr. Nicholls worked (since 1997) before coming to Georgia, makes its own soil, composting 40 to 50 truck loads of leaves that are brought in every autumn.

He also talked about the history of the province of Newfoundland & Labrador, including the death, in 1829, of the last living member of the Beothuk tribe, the early industry (cod fishing) and the current one: oil.

Future "Tales of the North" have been promised; I, for one, am eagerly looking forward to them.
Posted by Lya Sorano at 4:12 PM