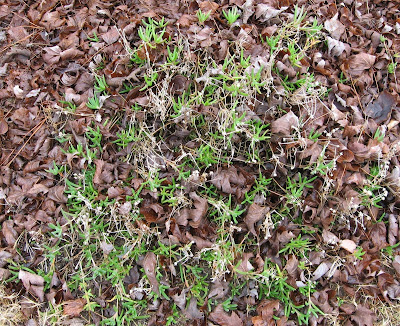 Recent magazine articles and blog posts have made much of "winter interest" in our gardens, including the advice to leave spent flowers on the plants until next year's spring weather announces a new season. Suits me! I've generally done that for years, certainly with my pretty Sedums. This year, the Iceplant has been allowed to keep the remains of its flowers also (less work for me'!); it's nicely tucked in under the leaves of the Maple above it. Grown from a seedling in a 4-inch pot, it is now several feet across - and still growing. 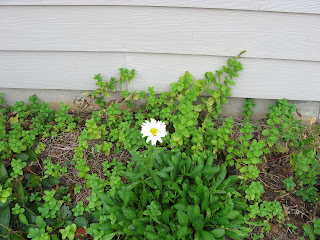 This Daisy missed the memo that it is November; it's blooming either 6 months late or 6 months too soon (among some of that mint I've got to remove; yes, I was warned not to plant mint directly in the garden - keep it in pots instead - but I love mint iced tea in the summer!), and it's a cheery sight on a cloudy day with falling temperatures.
Posted by Lya Sorano at 12:04 PM