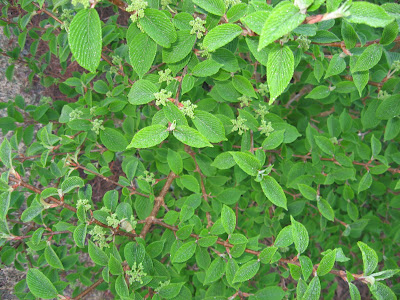 More like "Fifth Year"! Thursday is the fifth anniversary of this Viburnum (Viburnum plicatum tomentosum 'Mariesii') arriving in my garden. I bought it because I had read a description of it in my favorite gardening book: "When the flowers come in April, they emerge on top of each branch, covering it all the way to the tip. Then it appears the green cake has white icing - a spectacular sight!" It was not in bloom when I bought it, but it was a young shrub, so this did not bother me. Then it did not bloom in 2007 either, or in 2008 and I began to wonder if I shouldn't just dig it up and throw it out. I didn't, because even without blooms it was a spectacularly beautiful plant. When it still did not bloom last year, I sent an e-mail to the growers, asking if they knew what might be wrong with it. The answer that came back told me there are "many reasons" why a Viburnum might not bloom, the most common being that it does not get enough sun or that it has been too rigorously pruned. I wrote back that this baby gets plenty of sun and a pruning tool had never been within ten feet of it (something to that effect - a bit politer). Growers were not heard from again.

And now look - this Viburnum in early April 2010 is full of buds and it looks as if five years after I brought it home I will finally get to see that "icing on the cake" in a week or two!
Posted by Lya Sorano at 9:11 AM

I'm glad you are getting your first blooms this year. Even if it never bloomed the venation is a nice sight of it's own.