I did not think I would ever be much interested in conifers, but I bought one (Cupressus chengiana var. jiangensis) three years ago, for $2 I think, put it in my garden, and . . . nothing! It was just 2 or 3 inches tall and I did not pay much attention to it, but 6 or 8 months later, when it had still not grown even a millimeter, I dug it up and put it somewhere else. Same thing happened there - nothing! Finally, I found it a third place in my garden, under a rapidly growing pine tree, where it would, I figured, die and be gone. Well, what do you know? Here it is, a year and a half or so after that last move, and it is growing taller and stronger by the day. Over 2 ft. now and there's no stopping it. Of course, I'll have to dig it up again towards the end of this year (as long as it's growing, it's too close to the pine tree) and find it a place of some prominence in my landscape. It's a beautiful little tree. The flowers beneath it, by the way, belong to some Germander - very nice herb. No culinary or medicinal uses I'm aware of, but I love those lavender-pinkish flowers! 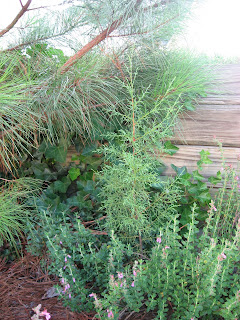